I’ve finally actually left! I rode out of home in Nottingham on Sunday Morning. A very boring ride down the M1 to get to West London to stay with some friends for a traditional games day of board games, escape room and Chinese takeaway then off the next morning to the Chunnel.

Waking up the first day in France felt weird. I expected to feel like I was on the trip, on an adventure, but it was actually just a freezing cold, wet car park in France. I suppose it doesn’t help that I’ve been through there before a couple of times, ridden in France a lot, and camped with the bike, there was really nothing new there to feel adventurous.

The decamping routine came back to me pretty quickly. Bike cover off and packed, locks off, gear tidy up, rope tidy up. Getting dressed, packing up the bags with everything I took out, reorganising as I go. Pack the panniers with the camp stuff, fit the rear bags, try and dry the tent, get bike gear on, pack tent up, secure everything with the straps, double check everything, set off. It usually takes about an hour from snuggled in the sleeping bag to riding off.

Day 1, 2 and 3 was quite dull really, northern and central France doesn’t really make for excellent motorbike riding, just getting miles done, stopping in a McDonalds or two, and looking for camping spots. I definitely had the riding itch I read about somewhere, you just want to keep riding, you see no real reason to stop anywhere other than a quick rest at a petrol station. It’s mostly caused by nerves, if you keep moving nothing can go wrong, once you make camp you’ve succeeded, until then, things can go wrong. This is obviously not true, but your subconscious doesn’t know that. The first three days were pretty long riding days, but I slowly broke the itch, first by not using motorways, and second by forcing myself to wild camp (camping somewhere that isn’t a campsite, generally in the wilds out of the way, but not always) which can’t really be rushed like finding a hotel can.

By Day 4 I was happily taking farm tracks up into the Pyrenees, knowing they were almost 3 hour detours. Though I had to keep telling myself it’s OK, this is why I’m on the trip, to detour and enjoy the areas and the riding. It was stunning up there, going from 300m to 1600m repeatedly through the day, half of the route was on single track roads with cattle crossing it. Winding up the mountain is hard work for the bike, sharp blind turns and steep climbs in places. Coming down is hard for me, with all my weight on my arms, heavy braking, and off camber turns. Bloody good fun though.

I met Mike from Oregon who was at the start of a big trip too. I had just sat down on the grass at the petrol station just over the Spanish border when I heard a mean exhaust noise coming down the road, he spotted me and waved, I waved back, noticing he was all panniered up, looked very travellery and just ridden over the border. “That’s another adventure rider!” I jumped on the bike and set off in chase, caught up with him about 5 minutes later, and when he saw me in his mirror he pulled up. We had really good chat for 30 minutes about the bikes, travelling Europe and all sorts. I wish him the best on his Europe trip, he’s got a lot of stuff ahead! 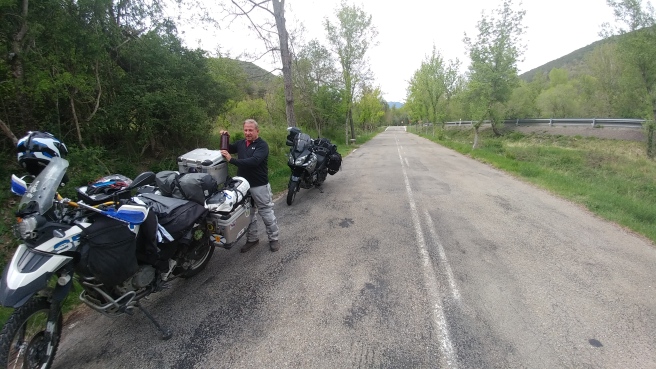 I made up for the pleasure of Day 4 the next day with a very long day, around 450 miles. I did detour through some mountains and avoided the tolls all the way from Ainsa to Benidorm. I’ve travelled that section of Spanish coast a few times, so there was nothing new, but riding in hot weather was a welcome change.

Arriving in Benidorm was lovely after 5 days of camping, a cold beer and dinner waiting for me at my Dad and Step Mums place. I’m staying here for a few days while they take care of me, plenty of beers in, good food and lovely weather. They’re the last family I’m going to see for a good long while so we’re making the most of it.

I set off on the 11th May from here to start heading east for the first time and really get the trip underway. For now, more beer in the sun.