Finally the day to leave Islamabad, it didn’t start very well though. I got packed up, gear on and bike loaded, then realised the battery was entirely flat. I suspect some kids turned on the heated grips the night before, they were very interested in the bike and tend to poke around it. Luckily Martin and Xenia were staying right across the road, and Martin has jump leads, so 15 minutes later I was back in action.

I headed off alone to Lahore, Martin and Xenia would catch me up the next day. A long and boring run to the city where the traffic turned to absolute hell. There might be 4 lanes painted on the road, but anything goes; if there’s a 10cm gap, somebody will be in it in seconds. You just have to get super aggressive and don’t let up at all. At one point the traffic stopped for a train crossing and the chaos leveled up to maximum. Everyone just kept pushing forward into every gap, going left around the traffic onto the dirt, if that was blocked they’d just go further left, despite the fact the road was only wide enough for 4 cars at the level crossing. If there was an inch forward to be made, you can be sure they’d fight tooth and nail to get there, even if it meant going 3 inches sideways. In 40 degree heat it was hell, slowly melting into a puddle of sweat and angry. I was utterly spent by the time I made it to the hostel. 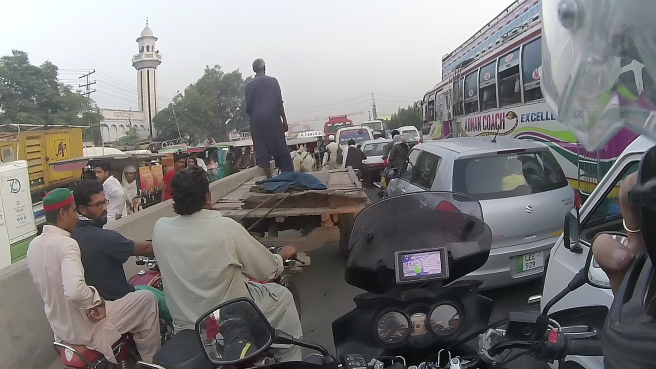 I had Déjà vu of the hostel when I got there, it was a very weird feeling, I’d read about it in at least 4 blogs or books of other travellers since it’s the only real hostel in Lahore. It always seemed so far away and adventurous, now I was here I just wanted some water and to cool off, the trip very rarely feels adventurous in the moment.

Unfortunately, because it’s the only hostel in town and because it’s cheap, there’s not a lot to it. I had a horrendous night, melting in the heat and hardly sleeping so decided to move to a cheap hotel in the morning. There wasn’t even any other travellers there to chat to, it may be very cheap, but it comes at the cost of sleep, I’m no hardy traveller.

Lahore is a pretty crazy town, it felt much more like what I expected from a Pakistani city, wandering around and there’s a million things happening all the time. The traffic is insane, people just flying everywhere, animals sauntering through it all. Tiny streets crisscross everywhere with little dark stalls filled with everything you can imagine. Whole streets of metal workers, another street specialising in plastic chairs and nothing else, fabric streets and everything else. The best way to walk around is to just walk blindly, people tend to not want to crash and will just avoid you. It takes some getting used to, just wandering slowly across 8 manic lanes of traffic, but it works. This was more like what I was expecting Islamabad to be like, a crazy mess of people, not the purpose built city.

We headed off in the evening for the famous border ceremony between India and Pakistan. A 30 minute taxi ride to the border area and then a short walk from the car park. It felt something like entering Disney Land, lots of people walking up the fenced road with music playing toward what was essentially a stadium surrounding the border gates. The ceremony happens at every opening and closing of the border, with lots of gesturing, marching and kicking by the guards on each side. It all seems to be in good fun, you can see them occasionally cracking smiles at each other, the crowd of hundreds of people go absolutely nuts though, and the music is turned up to full to drown out the other side. We got very patriotic for Pakistan when the guy behind us bought flags for his family and gave us one too.

The next morning we headed to the border again, with the intention of crossing this time, not spectating. A simple process compared to most border we’d been too, lots of writing, guards copying our details in a million different large books. Then we were in India! A very weird feeling, it hasn’t quite sunk in that I’m riding on that spot on the map, the big triangle that always made me think of dirt and chaos and somewhere I’d never like visiting. Now I’m here I can’t wait to get started. 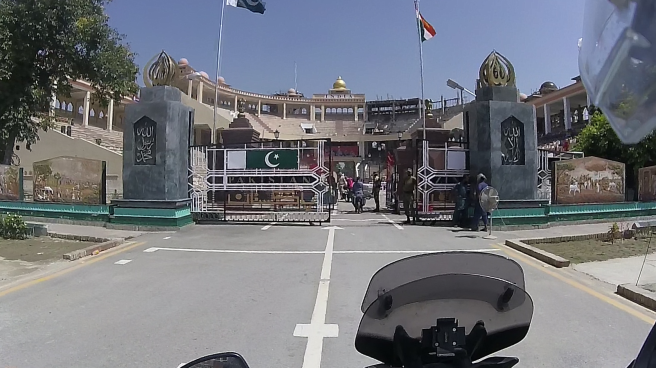 We tried a couple of places before finding a nice hostel that had parking for the bikes and a reasonable price. It was full of travellers, lots of them coming and going in the 3 days we spent there. It was very odd for us, we’d spent a long time with no other foreigners, let alone travellers. We met a few in Osh and Tajikistan, but they tended to be other overlanders, these guys were backpackers or holiday makers, or just plain hippies. It took a little while to remember how to even talk to people like that, without asking how their car or bike is doing, or what their route is.

We took a some time sight seeing in our few days off, visiting the Golden Temple one evening with some other guys from the hostel. A pretty incredible place, and surprisingly peaceful for a place utterly packed with people. A huge and very golden temple sits at the centre of the lake, where thousands of people constantly walk clockwise around the edge, some taking a dip in the holy water. The temple is also home to the worlds largest free kitchen, feeding anywhere between 50,000 and 100,000 people per day. It’s an incredible sight to behold, the constant stream of people going in and coming out show how efficient it is. It is almost entirely run by volunteers, preparing the food, dishing it out, cleaning up afterwards and keeping people coming and going smoothly.

On Day 142 we made the run from Amritsar to Jammu, fighting with the traffic and heat to get out of the city. The traffic is so chaotic Xenia ended up being knocked off her bike twice by tuk tuks squeezing into gaps and just pushing her over, not being able to touch the floor from her bike doesn’t help. We made it, sweaty and frustrated onto the highway and had a nice easy run the rest of the way. It took us a long time to find the hostel though, we knew we were in the right spot, there was a German 4×4 on the street but we couldn’t see any signs. We were about to leave for somewhere else when a woman came out and pointed us in the right direction. Up 3 flights of stairs was a little house, with a spare room to sleep in filled with kids toys. We looked at each other skeptically as she told us she had spare mattresses for sleeping and dinner wouldn’t be long. The skepticism vanished though when we asked for the price and she looked at us confused, “free, of course”. Turns out it wasn’t a hostel, just a family offering their home for overlanders. The tone completely changed after that, they were inviting us into their home and giving us dinner, for no more than being overlanders. We had an amazing night laughing with the German owners of the 4×4 and the couple and their daughter. 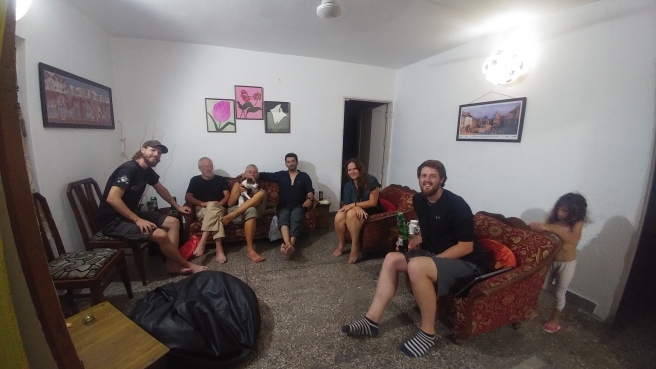