So I ended up staying longer than the 1 night I initially planned at the Hostel in Durres, I stayed for 3. It’s the first time on the trip I’ve stayed still too, not counting Benidorm which was very much planned. I knew about an hour after I arrived I wanted to stay at least a little longer, the food was really good and cheap, the people were awesome and the hostel was quiet warm and comfortable right in the middle of town. I checked the route in the morning on Day 25 and it was either leave right now and get to Greece fast or leave on Friday to avoid a big thunderstorm coming in. I checked my schedule and I’ve got 2 weeks to do about 2000 miles, easy decision made.

Durres is a nice little coastal town, nothing all that special about it, but it’s so chilled, the people dawdle and the only thing loud is the huge Mosque in the square that blasts the call to prayer at 5am. Seemed perfect to stick around in to recharge. I started the day with a walk around town to see what I could find, and wander up the hill overlooking the town. Then I joined a couple of the volunteer hosts for some shopping and they cooked a big group dinner that evening. Everyone chips in a little (actually a little. Like £1) and that feeds everyone. Other than buying a few clothes I needed and washing the others the rest of the afternoon was just beer and chatting. Bliss.

The second day off was bliss again, but in the rain. The thunderstorm came in and poured down all day. Other than running out to get a pizza I don’t think I left the hostel. I just played a few games, read a little and caught up the blog and images. It was so nice to properly recharge. I hadn’t stayed still for a whole day since Benidorm and now I’d had two. Finishing the day a little early or treating myself to a nice Airbnb only goes so far to recharging the batteries.

I did chat a lot with the other guys in the hostel over drinks on both nights and it didn’t take long for me to feel like a real amateur traveller again. One couple there had been walking for 2 years, from India. Not hitchhiking, or flying then walking around, literally walking from India. They occasionally took lifts from people when offered. Nuts. Another guy had basically been travelling on and off all his life and was now in his 40s, he’d ridden Urals in the Urals, travelled South America by motorcycle and worked abroad a load to travel there too. Puts 4 weeks through Europe in perspective!

Day 27 was back on the road. I planned to get to Saranda to meet someone. When I arrived at Durres a few days before, people told me about this other guy on a motorcycle that stayed the night before who was planning to ride around the world. I managed to get in touch with him to see if he wanted to meet up, and Saranda worked out.

It was a little rainy ride down the coast but decent roads, not too many surprises other than coming round the corner to an Italian couple trying to pick up their huge cruiser in the middle of the road. They managed to get it upright before I could get off the bike, it looked like they’d put it on the side stand facing downhill, rather than crashed, easy mistake, and they seemed fine. Albanian roads seem to be fine once you get used to them. You just have to expect random missing tarmac and manhole covers that are 3 inches above the road around every corner. The stray dogs can be a problem too, some will lay in the road and not move an inch, others will jump and try and eat your wheel. Not a smart plan, and you never know which it will be until 3 seconds before it happens.

Arriving in Saranda was not so fun, it just started raining hard as I got to the city and I had no idea where the hostel was. I didn’t want to use my phone in hard rain so I just headed to the where I thought it was and started circling. I couldn’t spot anything and the most people either didn’t speak English or thought I was crazy when I asked for “The Hairy Lemon Hostel”. I eventually stopped in a cafe to look it up and made my way to the address. I still had to circle three times to find it. There was one small sign on street level and the hostel was on the 8th floor but I eventually found it with the help of a hotel receptionist.

I met up with the biker from the Durres hostel and we headed off with another friend for some seafood. We had an awesome night just chatting about travel and bikes and plans over some beers. Somehow the night ended at about 3am when Spirited Away finished and the last of the beer was gone. 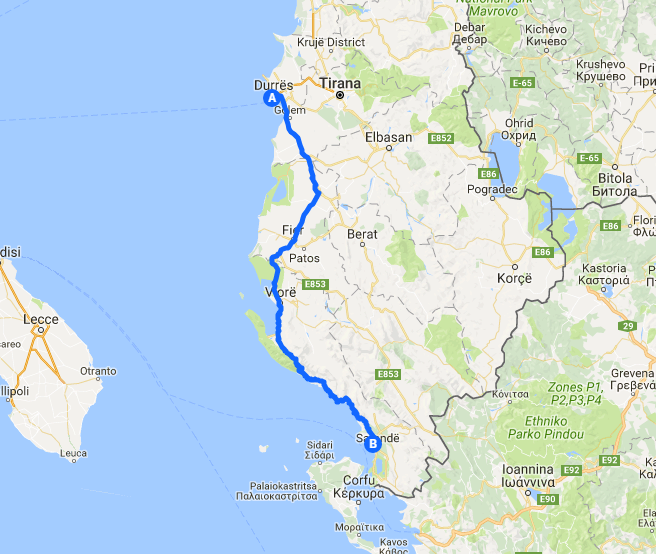