I started Day 22 pretty well, riding down the Coast away from Split toward Dubrovnik. Then about 2 hours into the ride my music suddenly stopped with a crackle and my “shutdown” sound played from my phone. Odd, I had loads of battery. I pulled over to check it and my phone was soaked from the rain. Seems I didn’t bother closing the pocket properly. Shit. One wet phone. I spent the next 4 hours of riding coming up with a plan.

There was a little hop over Bosnia to get to the separated part of Croatia that Dubrovnik is in, so I’m counting Bosnia in the list of countries, even if it was only for 20 minutes.

After I arrived and got checked in to the Airbnb (much hard without a phone!) I took my phone apart to dry and hopefully fix it. After about 3 hours of trying the screen was just broken, I think the water got far enough to short the backlight and blow something. Startup sounds would play but no screen. I tried again the next morning when everything had definitely dried but still no luck.

I managed to buy a new one, exactly the same model for about the same price in a shop not far away. Could have been worse, but it’s money out of the budget now.

That afternoon I finally got to see some of Dubrovnik, now the phone crisis was sorted. It is a beautiful place, it reminds me a lot of Venice with it’s tiny, ancient streets. I was actually a good little tourist and paid for an attraction, walking the walls. It cost £15 but it was well worth it. It took me around an hour with my long strides and it’s a complete circle around the Old Town so you can see everything. It’s also awesome if you’re a Game of Thrones fan, tons of scenes are shot here and they’re easy to spot.

Day 24 was the ride down to Albania, the rains were threatening to come in the afternoon so I wanted to get somewhere dry and found a hostel online. I set off around 10 and got a good run to the border with Montenegro. This was the first international border too! I needed the V5C and insurance to get in to Montenegro, the border guard kept my passport while I went and bought temporary insurance, which didn’t fill me with confidence. The insurance guy asked for 100 Euros for temporary insurance! I protested, then realised he was holding up 100 Croatian Kuna, not Euros, much more reasonable at about 10 Euros.

The ride through Montenegro was awesome, started by riding down the coast and winding around the bay toward Kotor. The thundercloud was following me the whole way and I could see flashes of lightning but managed to outrun the rain. I stopped for some coffee and wifi top up before heading off up The Serpentine. I saw the road on the map and had to give it a go. It was good fun riding up, a crazy amount of hairpins and squeezing by a bus, and the epic view at the top. 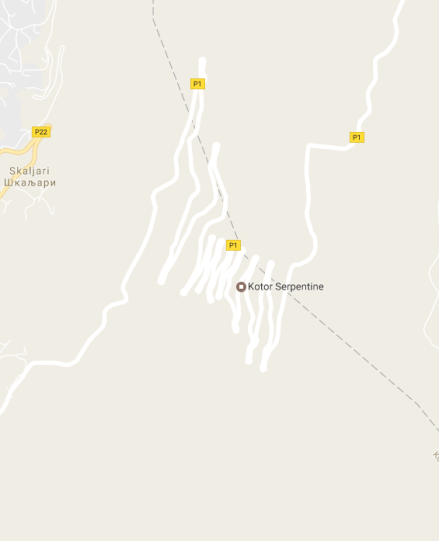 Coming down the other side of the Serpentine was much more interesting. The road just disappeared at some points. It looks like they’re widening it and smoothing out the sharp bends by blasting away the mountain to speed up the route. But instead of closing the road, or doing it piece by piece, the tarmac just stops and you drive on gravel and stone, sometimes on the old route, sometimes on the new. It made it a nice challenge and I’m quite chuffed me and the bike were up to it, just took it steady and everything went fine, no surprises or slips, just nice riding.

I made it back to the main coast road and carried on to the Albanian border, this one was a lot simpler, exit and entry in the same booth and a separate lane for motorcycles. Easy as that I was into Country number 10 of the trip!

Within 100 yards of Albania it was very different. There were lots of huts lining the road, horses pulling carts and the roads were pretty terrible. I chalked it up to being a the area around a small border crossing, but it continued for the next couple of hours. It got a little weirder, with Porches using the same roads as horse and carts carrying hay heaped over them. The drivers were downright dangerous, overtaking with millimeters to spare, and some pushing trucks off the side of the road. People stopped to chat in the cars on dual carriageways and stray dogs wandering across the road. It’s not completely insane, I imagine India is going to be far worse, it was just such a contrast to Montenegro and I wasn’t expecting it at all.

I made it Durres at about 7 that night and found the hostel almost straight away right in the centre of town. I got checked in and even got to park the bike in the secured garden, always a massive bonus not having to worry about it. The people here are a mix of volunteer hosts with long term and short term guests. They were all so nice from the moment I arrived. Within about 30 minutes I’d had a shower, someone had got me a beer, then someone else took me out to get pizza at a place they knew, even lending me the money for it since I didn’t have any currency yet. Winner. I was planning on being here for 1 night, but I think I’ll end up staying longer. 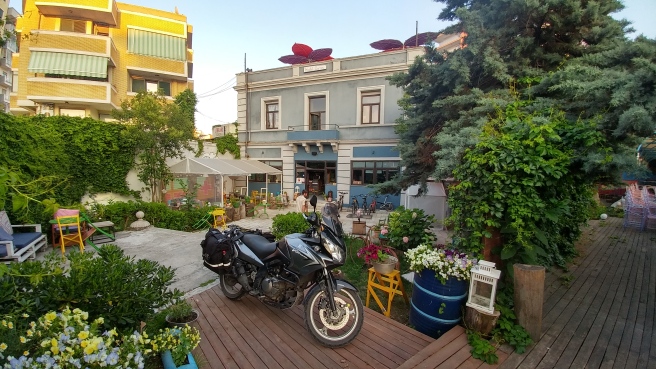