Waking up in Hanoi I was more sure that I didn’t like the place. The six or so hours in the city the day before had given me a bad vibe already, and the night of broken sleep in a dorm room with drunks and stoners sealed it. I can’t put my finger on exactly why I didn’t like the place but, after being in so many cities on this trip, I get a vibe for a city quite quick, riding in on the bike helps see a lot of it too. Hanoi Old Quarter was busy, super busy, and the streets of Old Quarter were tiny, so traffic was constantly grazing pedestrians and getting stuck with cars facing each other. The stores repeated along the streets, bar, club, motorcycle rental, convenience store, trinkets, and the people running them were plain rude, right from the offset. I can see why though, tourists utterly drown this place, some of the worst kinds too, they’re here for cheap drugs, partying late and the “massages”. 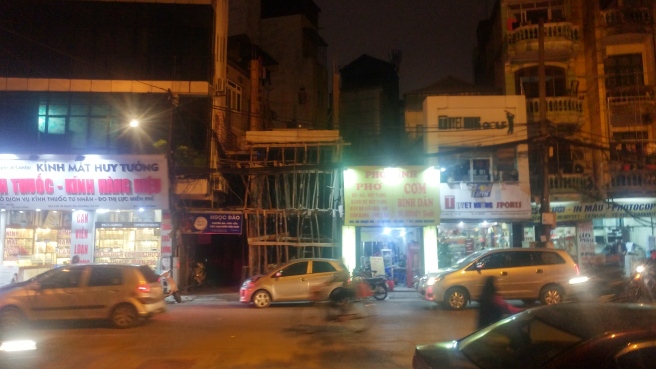 Me and Chris met up for Breakfast and started our planning, mostly concerned with how quickly we could get out of the city. Neither of us are party goers, give us a quiet spot in the middle of nowhere over a club any day, with internet of course… We decided to head to Ninh Binh the next morning, so I could spend the rest of the day fixing up and selling Charlee’s motorbike. I was hoping to sell it to some backpackers but it would have to be that very day or it would have to be parked in Hanoi until we were back in town, which would then be Christmas, so it could be another 2 weeks. Luckily after a few fixes and a spit-shine some of the bike garages started making good offers. I rode around them all for a couple of hours slowly getting the price up until they all hit their limit at $350. Sold! A little less than I hoped but it’s one worry off my mind and no reason to come back to Hanoi. 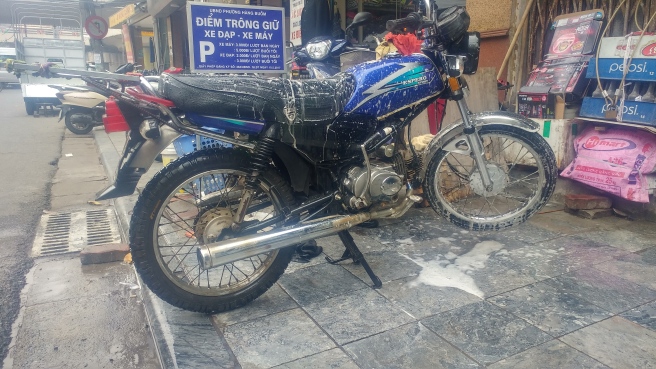 An early start the next day for our first “Top Gear” style race, Chris jumped on the train toward Ninh Binh, just as I was waking up. I got an oil change and set off in chase on the bike, accidentally taking the restricted expressway for a bit and nearly running out of fuel as a result. Chris had to spend an hour waiting for me in a dead part of town being harassed by a Vietnamese guy to buy anything and everything he could think of.

We’d picked out some Bamboo Huts in the middle of nowhere to stay at for a day or two. They really were in the middle of nowhere too, out of the town, through the villages and out the other side and onto the tiny gravel tracks raised up between the rice fields. Chris was bouncing around on the back of the bike wondering what the hell he’d got himself in for as the bike squirmed and creaked on the rough roads.

We settled in to the huts and I got to play with my new toy! With some plotting and scheming Chris had transported my Christmas present from my Mum all the way out here. A new Guitar! It’s made by “Snap Dragon” in the UK, and it’s a pretty special one, this one breaks in the middle on purpose, twisting the neck around making it much easier to store and carry. With a small hollow plastic acoustic section and removable body it’s a pretty perfect travel guitar, and will hopefully last longer than the last one.

We ended up staying in our hut for 3 nights. Our private hut was one of only 5, with 2 huge beds, mosquito nets, decent internet and the hotel restaurant not 100m away. We barely moved from our beds the first day, Chris getting in Holiday mode and me chilling after 2 weeks solid travelling on the bike, it helped that it poured with rain all afternoon. We decided to stick around a second day and maybe actually see something of the area. There was a ton of cave tours, boat rides and mountains to climb, we mostly rode around on the bike checking out the views. We climbed to one of the mountain temples for an amazing view, even with the fog, and quickly descended again when we heard thunder; the top of the mountain would not the best place to be stood when that arrived.

We had another Top Gear race to Ha Long bay the next morning. Chris taking a Taxi then a Coach and me on the bike. I won this one handily since Chris’s Coach never arrived. So I had a good 30 minutes staring out at the bay from the outcrop me and Charlee had ridden too, the view was clearer today and the islands just went on and on. We’d decided to head to Cat Ba island, it looked like a nice quiet place and it would make a change for me, since I’d been on the main land already with Charlee.

There was a lot less fuss in getting to the island than we had expected. We rolled up to the ferry terminal, bought our tickets there and then just rolled the bike on when it turned up. Easy peasy. We spent the hour long crossing chatting to some other guys riding bikes around Vietnam and they gave me some great tips for the North when I head there on my own and even some for New Zealand, if I ever get there. The crossing itself was beautiful, winding between the islands of the bay. It dropped us off at the North end of the island and the only real town was at the southern tip, so Chris jumped on the bus and I set off on the bike. I think that ride is one of the most beautiful of the entire trip so far, it had nothing extra special, no 4000m peaks or river gorges, but it was so peaceful, riding on a little road, mostly alone, through the jungle with sheer limestone mountains rising up now and again. I got a little lost and ended up at the wrong shore, I didn’t even care, I was happy to have to double back a little ways and see more. 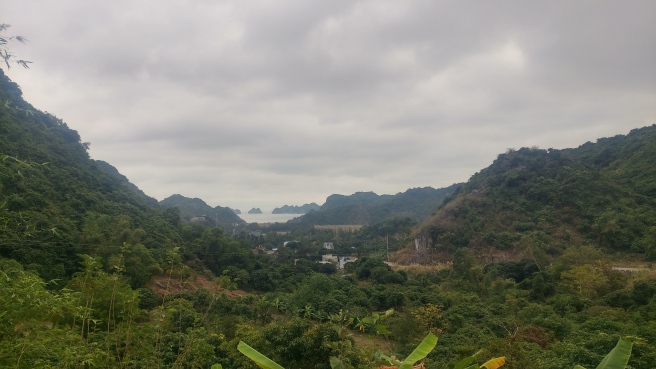 We jumped on a boat tour around the bay the next day, the same style as the one me and Charlee had been on, but with a different route and stops, it was definitely worth it. Climbing and scrambling up Monkey Island, unsure how we were even supposed to get down again. One girl being attacked by one of the monkeys, chewing on her hair while she screamed but standing still as stone. Kayaking through some amazing caves into little peaceful lagoons that could have been faked for a movie. Then laughing as some on the boat went for a freezing cold swim. 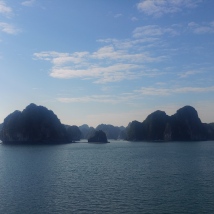 We did some exploring back on the Island too, around the Cannon Fort used for the defence of the bay, very well preserved and a little creepy with mannequins manning the cannons. The hospital caves were interesting, during wars locals retreated to the caves in the Karsts during bombings for shelter. One large cave near the centre of the island had been used as a makeshift hospital, corridors and rooms were constructed from smooth concrete, making it feel more like a dungeon prison. 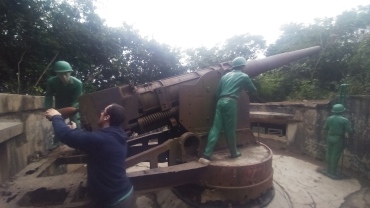 Back to Ha Long bay on the ferry, this time full to the brim with Chinese tourists (officially the worlds worst tourists) and their six coaches! There were some more motorbike tourists for us to chat to though and swap advice. An afternoon off in Ha Long to plan the most glamorous of our Top Gear races. Chris was taking a Sea Plane back to Ha Long, leaving from the ferry terminal and flying over Ha Long bay for some stunning views while I slugged it out on the motorway on the bike. The flight was only 45 minutes but with airports and taxi’s included it took about 3 hours and I beat him back to Hanoi by about 10 minutes. I also had a quick scout around different areas of Hanoi, I’m planning on taking a chunk of time off travelling over Christmas, treating myself to a nice apartment. I haven’t had a proper break since Pokhara and travelling over Christmas could be difficult if places are closing. There’s a lovely area North of the lake, filled with nice looking restaurants, super markets and not too much traffic, perfect, just need to find an apartment now.

We had two more days to spare in Hanoi and we were determined to make it fun despite Hanoi’s best efforts. So we made it Nerdy and it worked a charm. We headed out looking for some nice Coffee for Chris to take home, a nerdy venture if you like your coffee. We did 2 different Escape Rooms, which are exactly what they sound like, you get locked in a room and have to solve all the puzzles to get out, they’re awesome. Then went to see the new Star Wars movie, not something I thought I’d get to do while travelling but with the number of tourists and English speakers in Hanoi makes English movie showings quite common. 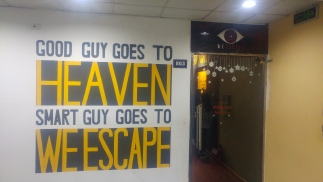 I’d managed, at the last minute, to bag one of the only AirBnB apartments left in the nice Expat area of Hanoi for 7 days over Christmas. We had our final little Top Gear race moving over there in the morning, Chris in a Taxi me on the Bike, in a big city the bike wins easily. Chris was flying out late that night so we had all day to kill and we’d left a ton sightseeing to do for that reason, we dumped all our stuff and went for a long walk. By the time we’d walked for 4 hours around the city we were knackered. About 9pm Chris jumped in a Taxi for the airport and I was all alone again. Which is not at all as bad as it sounds. Having Charlee and Chris out had been amazing, seeing friends again, travelling with someone, and having a great laugh with them both. But I am definitely a solo traveller, and I was looking forward to getting back on the road. 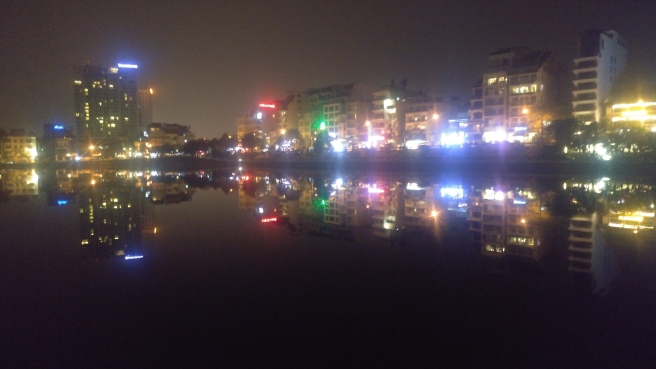 Before I got back on the road there was 8 days of furiously doing nothing, it was going to be bliss. Nothing on my mind, just organising my stuff, cleaning my gear and cooking my own meals for the first time in 8 months. It’s my first Christmas ever away from home, but I video called around the whole family on Christmas day catching up and showing off the beard and long hair which everyone wasted no time in making fun of. I expected no less. 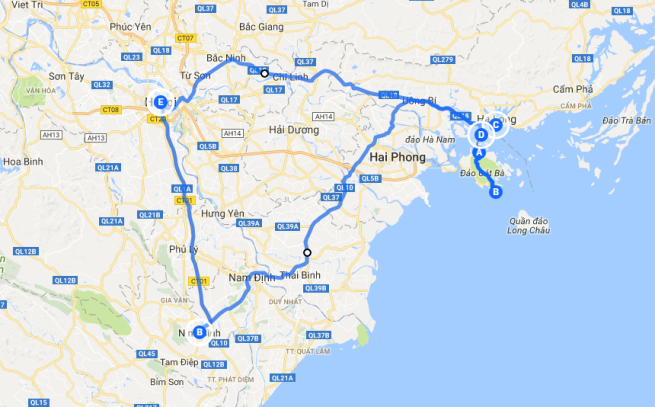