Very chilled out Day 33 in Varna, had a wander around the town and found some lunch then headed back to the hostel before the rain came and got some blog writing done and catching up. The rains never came though, which was kind of frustrating, I’d had a day off to let them pass. Oh well, I still got plenty done. There was loads of music and singing going on in the square right outside the hostel so I was sitting listening to that all afternoon.

I think I’ve decided I really don’t like cities. They get to a certain size and it changes a lot, or maybe it’s a certain tourism density. The shops change into chains and fashion things rather than things people need, and it brings out the worst in people, looking for money from the rich tourists and visitors. Lots more scams, currency exchange places suddenly have 3 people stood outside you have to fight off before you can get in. I do like visiting cities as a holiday and really seeing them, but not on the trip I think. There’s so much about staying in a city on the bike that I don’t enjoy it’s more than often not worth it.
Durres was probably the perfect size town, of all that I’ve been too so far, but sometimes they work out in spite of themselves. I wasn’t all that keen on Skopje as a city, but the hostel I stayed at was in the suburbs and really quiet with easy parking and local restaurants, even though it was only 10 minutes walk to the centre. I won’t avoid cities outright from now on but I’ll certainly be more careful.

The evening got very random very fast. I ended up surrounded in the common room by a bunch of Bulgarians, all friends and family of the owner,  while I was the only hostel guest. They’d all gathered because the Runner-up of Masterchef Bulgaria was cooking dinner . So I ended up eating an absolutely amazing burger, it wasn’t even on the same level as any burger I’ve had. I’ll call it an Üburger. 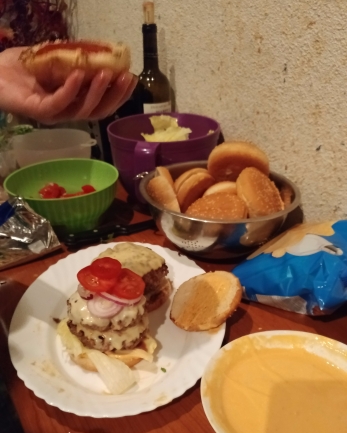 Day 34 started with a nice challenge. Get Donkey out of the hostel. I got him in on my own but it was a tight fit. The footpegs were too wide and the handlebars had to be turned and PIVOTd through the door. There wasn’t room to turn him around in the hall so I had to go out backwards, no engine power to help and much harder to adjust the direction, let alone bumping it up the step too. It actually went better than expected, the door frame was still in one piece, Donkey didn’t lose any bits and I still had use of all my limbs. I did get a lot of funny looks from people, but not a single offer of help.

Snakes suddenly became a thing! I don’t think I’ve ever seen a wild snake before, and now I’ve seen at least 3 live ones, and many, many dead ones. I may need to start paying more attention when wild camping. Do snakes like pasta?

Lots more nice riding through the mountains, down on the coast, through some small towns and quick stop for some lunch. I found a subway, it’s been way too long, when the guy asked what salad I wanted and I just said “everything”. All the salad please.

Note on the next 5 paragraphs: now I’ve written it, I’ve realised how exaggerated some of this sounds, but it was a very weird 90 minutes and I swear it happened exactly like this. Skip this if you’re already aware of Border Bureaucracy.

A nice long stint on good roads into the mountains toward the Turkey border. Safe to say this was the most complicated border so far. It started with arguing with a Bulgarian guard who wanted to see my Green Card insurance, which I didn’t have, because you don’t need to carry it for the EU as an EU citizen, just your insurance document, which isn’t an official document anyway. I just stopped understanding what he was saying and he let me go. So much for needing it. To be fair, I managed to accidentally travel through Albania without insurance, but they didn’t ever check on exit, but why would they. This guy must have just been bored.

The next post was a “make someone a job” post. She opened the barrier to let me in to the compound, then looked over my passport and gave it me back. Not sure what sure what would happen if I didn’t have a passport since she’d already locked me in the compound and I can only go forwards. I parked up the bike at the side and walked over to the passport control window who told me I needed a visa, and to go to the other booth to get it. The visa guy barely spoke any English but he checked his big board of countries and said 25 Euros for English people (UK? GB? English?). I’ve no idea what this pays for since countries pay a different price for the same sticker and stamp. I said I didn’t have 25 euros anyway (I have an emergency stash, but this wasn’t an emergency, this was bureaucracy), I got my last 20 Euros out of my wallet and then made over 5 Euros up in Macedonian Dennar and Bulgarian Lev coins. He was not happy about this, so he locked up his booth and we walked over to the duty free guy who spoke some English, he checked out my handful of change looked at me and said “What?”. I said it’s about 8 Euros. I just kept smiling until he took it and stamped my passport. Ask for stupid charges get stupid payments.

I returned to passport control happy with my visa and he stamped me in to Turkey. Success! On to customs to get the bike stamped in. The guy spent around 10 minutes looking over my registration document, occasionally typing something then called his friend over, this is not usually a good sign. His friend asked me where my insurance details were on there. I said “it’s a registration document, I need to buy insurance”. He said ” you need insurance.” I said “I need to buy insurance, where can I buy it.” He said “you need insurance.” So I took my documents and went for a walk.

I found the green card insurance guy literally sleeping in his booth. He jumped up and was pretty friendly compared to everyone else. He told me it was 100 Euro for insurance. I looked for any sign of amusement in his face, but couldn’t find any. I confirmed every detail I could think of. A motorcycle for 3 weeks. Just third party cover. No flamethrowers or knife wheels. Yep, 100 Euros. I called up my UK insurance to make triple sure that they didn’t cover Turkey and couldn’t cheaply add it. The woman on the phone filled me with confidence when she asked me whether Turkey was in the EU. She disappeared for 5 minutes to confirm with her manager whether Turkey was in the EU and if they covered it. No, obviously. So I had to dip in to some emergency US Dollars to go buy it.

Just as I got back to the insurance booth the heavens opened with a huge lightning storm and massive rain drops. So the insurance guy invited me in his tiny booth to sort out all the paperwork. The very complicated green card system requires him to email someone on a Hotmail address and wait for them to email the document back. He sent the email and it didn’t arrive back in the 5 minutes he expected. 20 minutes later he called someone and shouted some Turkish at them. Then told me “broke, sorry. Maybe go to other border. maybe 2 hours”. Bugger, it was already 5pm so I wasn’t keen on riding for 2 hours in literally torrential rain and storms to then get in to turkey at about 8pm with nowhere to stay. I hung around for another 15 minutes just in case, then decided to head 50 miles back into Bulgaria and stay the night and try again in the morning. Just as I was saying bye to the Insurance guy the email came through. Day saved. He was even so happy about it he nearly forgot to ask for the money and had to shout me back across the compound. So close.

I could have made the whole process a lot easier for myself by just having lots of spare Euros, but I didn’t need Euros anymore and they didn’t have an ATM there. Knowing the order you need things in also helps, but borders differ. Some have the insurance after you’re done with border procedure, some visas are done directly by passport control. You just have to comfortable looking like an idiot when they wonder why you don’t know things. Just keep smiling and asking for help and they usually end up helping you out.

The roads from the border to Corlu were actually really good, two lanes, long sweeping turns through the hills. I got to the hotel I’d booked at about 8pm, the guy was waiting outside and immediately dived to help. Helping push Donkey into a nice parking spot and taking all my bags inside. Then guiding me around to their secure parking. I’d actually cancelled the hotel already when the insurance didn’t come through at the border, but they’d held the room anyway.

I went for a quick walk around town to find some nice food, kebab and baklava obviously. Then to bed. Though the other guests had better ideas, walking around the halls shouting and 1am and someone playing drums on the bins outside at 2am. Earplugs are a god send. 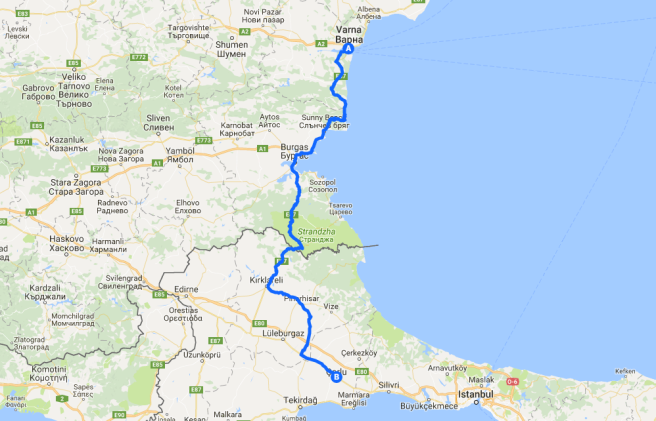