After the 8 days of “normal life” in an apartment in Hanoi, getting back on the road took some getting used to. The plan was to do a loop around the North of Vietnam, quite close to the border with China, there should be plenty of towns, and plenty to see. The first couple of days really bought me back to travelling with a thump in cold, damp weather on pretty dull roads to towns with nothing about them. 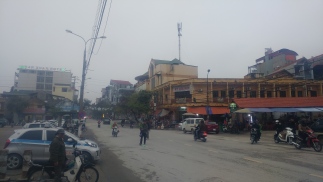 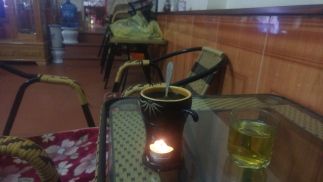 A day off in Cao Bang let me sit out the full day of rain that followed with coffee and a heater, so I set off in perfect weather the next day. I headed for a loop around in the hills toward the Chinese border with the promise of a waterfall at the top. The road wound through small villages, dodging between the Karts and passed endless farm land and I was loving it, back to fun riding. I got a little lost trying to find the falls and somehow nearly ended up in the local market but got there in the end. 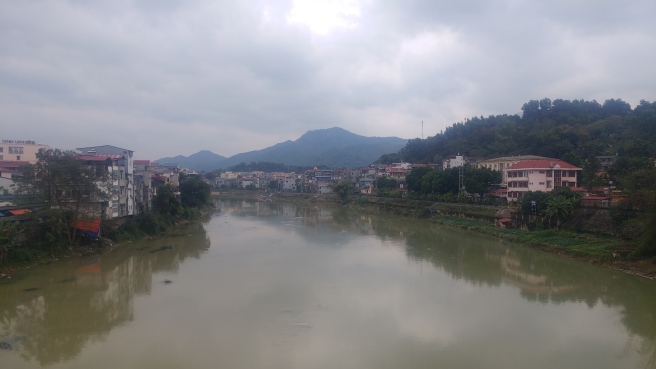 The falls were beautiful, one tall, one wide that join up to form one huge fall during the wet season. Chinese tourists poured onto the river from the opposite bank in boats, it’s a shared site between China and Vietnam, very odd to see it so lax after all our hassle getting in to China. I met a guy there from East Africa with a thick Texas accent who was travelling solo too, he was hoping to just pitch his hammock down the road for the night. No thanks. I’ll head back to the nice warm hotel room back in Cao Bang. He was going the opposite way to me through Vietnam so we gave each other some good tips for roads, towns and hotels as usual with other travellers. I think we spent more time chatting than we did looking at the falls. 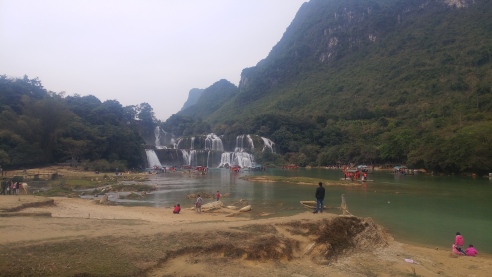 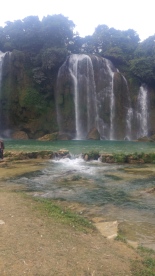 I had a job getting back to Cao Bang though, the second half of my loop was an unpaved road with more holes than flat ground for a couple of hours. If I was on Donkey this would be mildly annoying, but on poor little Deirdre it’s nigh on painful for me and her suspension! Trying to find the best line between the holes avoiding the thicker sand and mud while still gaping around at the scenery and tiny villages. 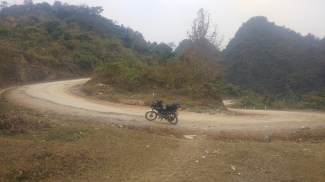 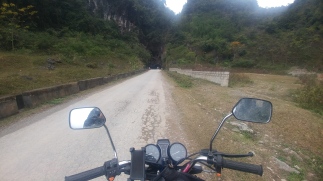 Another two days of muggy grim riding and I was second guessing myself, why spend time riding in the miserable weather where I can’t see views I came for? Sod it, keep heading North, it would be stupid to miss it now I’m here just because I’m cold. I’m glad I did carry on, climbing further into the mountains the views were outstanding. The fog covered a lot of the view but it was fast moving and let through glimpses of mountains and the valley below. It was like being in a Kong movie. 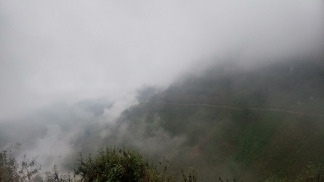 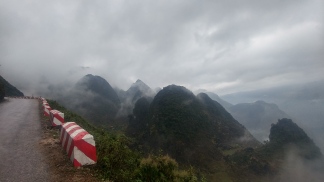 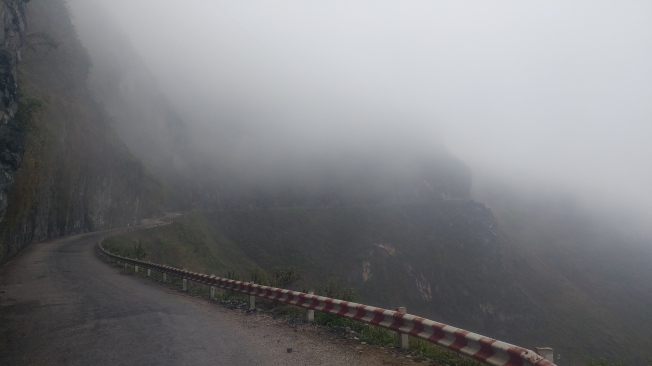 I made it the most northerly point in Vietnam at the flagpole North of Dong Van, following the muddy mountain road that wound it’s way toward China. I was sliding around like a motocross rider all the way there without the luggage weighing the rear wheel down. It was fun after the first couple of surprise moments, Deirdre is so light and small I can just throw her into corners and not worry about it, if we slide too much just stick my foot out and we’re back upright again. 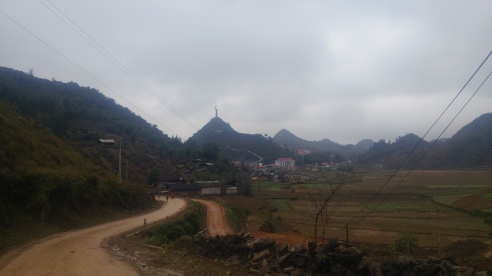 An evening drinking with the only other 4 foreigners in town in a pub right next to the hotel was a really nice change, everyone was there for different reasons and got there different ways so there were plenty of stories to swap. At least until the very drunken Foreigners vs Locals pool match started and then it was serious business.

With the weather starting to clear up it was a lovely days ride to Ha Giang, the views were incredible. Slowly climbing one side of a mountain (Very slowly, poor Deirdre) getting views back down the valley, cross the top of the pass and get stunning views of the valley I’m about to descend into, run along the valley floor, usually through a village and repeat it all over again with another climb. Other travellers started appearing on the road now that I was on a portion of a popular loop of the area. All in shorts but with jumpers bought locally because they didn’t realise how cold it was, with their theme park style ponchos on to stay dry, on rental scooters they’ve no idea how to ride. 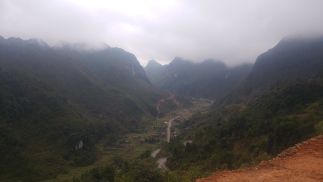 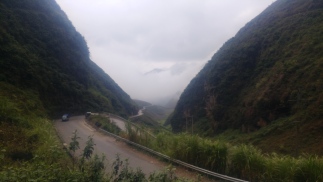 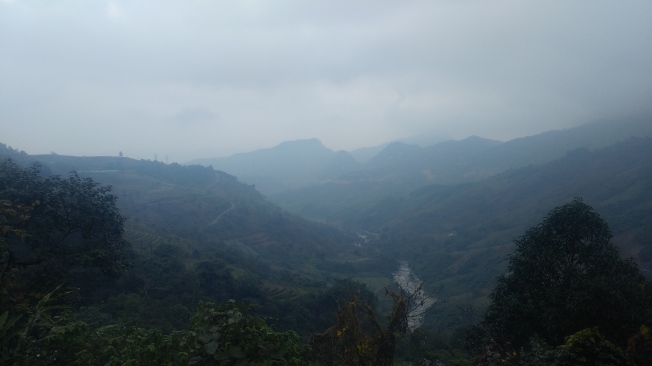 With nothing really to see in Ha Giang itself I set off on a very long boring day to Sapa. Despite what I’d read and been told by some travellers that it was an over-developed bore of a town, I quite liked it and had a day off. It was certainly developed, it seems Chinese tourists flock over the border for a peaceful mountain retreat with all the luxuries. It reminded me a bit of a Swiss resort town, though maybe that was just the cold and fog. Deirdre needed some love, on the steep mountain road to Sapa the chain had started to slip under heavy load, not so fun when you’re leant over in a corner, so I’d had to limp it in to town very carefully. Some very dopey mechanics replaced the chain and sprockets, I tried to stay and help but nearly cried watching them work so just left them to it for a couple of hours, resolved to fix it myself if they messed it up. 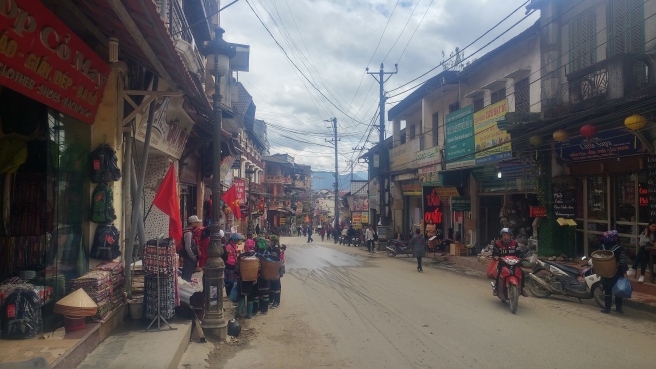 I set my sights on Laos after Sapa and headed for the border, hoping to find a hotel near it so I could cross the next morning. I got properly soaked. It was raining when I packed my bags in the morning, raining when I stopped for lunch and still dripping when I pulled into the alley of the hotel. My Klim riding gear is supposed to be waterproof, it doesn’t seem to really work if it’s raining and you’re sitting down though. The main zip and arm zips leaked, and my jumper wicked the water all over itself until my torso was soaked and freezing. The crotch on the trousers leaked and water wicked all down my legs. If it hadn’t been for the unexpectedly nice hotel I would have been fuming and miserable, but a warm shower and a comfy bed does wonders.

I contacted Klim about the issues and they just said “The zips aren’t waterproof”. Not sure how it’s ever supposed to keep you dry in that case, but I won’t be buying anything from them again. “Guaranteed to keep you dry” my ass. I may be able to claim the trousers on warranty but I’d have to send them off for testing, so I’d be without them for at least three weeks, not an option.

I woke up in the morning with a man shouting at me, then realised it was probably next doors TV. It was 6am, when I got out of bed to hammer on the wall though I realised it was coming from the window. It was the town PA system, announcing various things 3 times a day. It required more will power than it should have to drag myself out of the comfy bed to put cold, soaking wet clothes on again. When I finally managed it I was off to the border, three hours or so running through farmland and wood shack towns. I stopped for a pee on the side of the road and nearly jumped back into the road when I looked down and I was stood on dead leaves that were teeming with large insects I didn’t even recognize, some crawling there way onto my boots. The good news was I was nearly dry by the time I got to the border post, a bit of sunshine and a breeze had done the job. The bad news was I wouldn’t be crossing to Laos. When I rolled up I said hello to the four border guards stood together chatting, they came over and walked around the bike and just shook their heads apologetically saying “no”. I eventually got it out of them with a map and lots of hand signals that I wasn’t allowed to cross at this border point. Well I was allowed, Deirdre was not. Bugger. They told me the nearest border that would allow me was 2 days ride South. 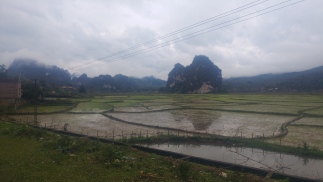 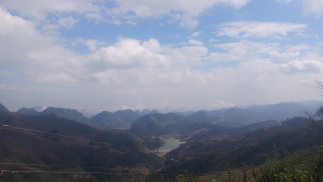 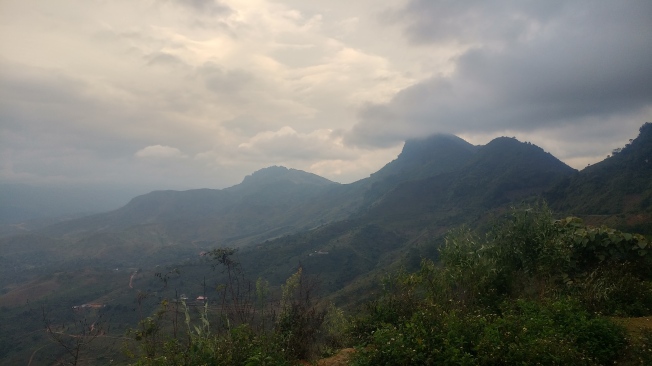 It was very frustrating not being allowed across, just for some silly rule about local bikes, when most other border points were fine. I tried everything I could to “convince” the guards, but they were friendly and helpful and I could tell by their manner that it really was out of their hands. Oh well, another 3 hour ride back again isn’t the worst thing. The road was gorgeous, I could finish drying out and stay at the same lovely hotel again.
Well, 2 days ride south it is, off to a good start too with a flat tyre at lunch time. It went as well as any flat tyre could have. I looked down at the tyre, sighed, looked up and there was a mechanic right beside me, with a workshop in the front of his house. I helped him get the wheel off, then played his guitar, laughing with his little girl while he changed the tube and even the rear brake. Thirty minutes later I was back on the road.

Another morning requiring all my willpower, the temperature somehow dropped from the lovely 19 degrees to around 5. There was a long way to go to make it over the border and in hindsight it was a mistake to try it all in one day. The road was slower than I had hoped and I finished all the border shenanigans by about 4.30, with 30 minutes daylight left. I had no food or water with me, a tiny amount of local currency and no idea where a hotel was. Such a stupid idea, I may have gotten a little over confident in trying it and I was calling myself names as I was bouncing down the road, squinting in the dusk, sliding on changing surfaces I couldn’t see. I had been hoping to find a hotel along the road, but with mostly farming villages and zero tourists there wasn’t much chance of that. After 2 hours in pitch dark crawling along I made it to a town I knew had at least one hotel and spent 20 minutes circling around until I found it, with the help of some kids, maps are not reliable in Laos. It had a good bed, food and an ATM so it worked out pretty well despite my best 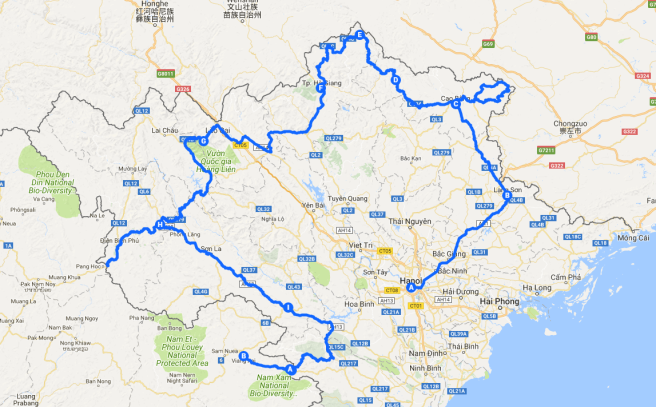